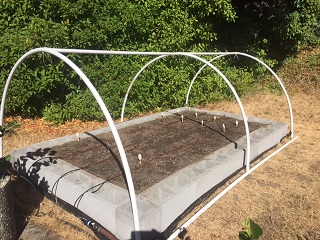 Took the summer off to toil in the veggie garden.  I calculated we could cut roughly $1000 from our fresh produce expenses by growing some of our own.  And so we did.  An interesting journey that I'll write up on my other web site when I get a chance.

As fall rolled around, we managed to disengage and make the rounds to hit the Paris, Orlando and Anaheim parks.  I'll summarize what I saw during our journeys and share my impressions.  Things are always changing in the kingdoms of the mouse.  I wanted to get a feel for how things are evolving for Made with Magic across the gamut.

In Paris, it's still like Made with Magic was never there.  Not a trace anywhere.  Didn't see any holdouts still shining proudly in the parks.  I hear it's not a very French thing to do.  However, we had a great visit with cast member Loru and talked with him quite a bit about what still can be done if folks have some MwM items hanging around.  Lots of great ideas that might make their way into future posts.

The merchandise that always seems to please from the Paris parks are the light up ornaments.  They usually have clever and unique offerings that aren't found stateside.  Really sweet.  When I get a chance, I'll gut the slow transition RGB bulbs from the base assembly and insert a MwM driven RGB in it's place.

The big surprise at the Orlando parks was how much the MwM foot print has increased in the Epcot park.  Didn't see that coming.  It was the Wine and Dine festival when we arrived and I saw a lot more kiosks selling MwM merchandise and quite a few folks with purchased items blinking away.  That was great to see.  As far as I can tell, the Illuminations show still doesn't support MwM but I read in a touringplans.com article that some of the concerts at the American Adventure Pavilion do.  The codes for the respective country flag colors are still active and seem to be enjoyed by happy MwM owners.

By the time we got to the Magic Kingdom in early November, they were already well into the Christmas transition (anyone remember Thanksgiving?).  Consequently, the kiosk emphasis was on Christmas themed blinkers.  Made with Magic stuff could still be found but certainly wasn't featured nor favored by the park visitors.  I read that the fireworks and mapped projections on the castle still include MwM but we were too tired to hang around for either on this trip.

They were well into the Christmas theme at Hollywood, too, but Made with Magic was displayed well on the kiosks.  Nice.  Found out that the Star Wars show now supports MwM.  I'd heard that before but wasn't able to detect any valid codes during a previous visit.  And on this visit I didn't have a working recorder to see what codes might be sent.  Next time.  I also heard that Fantasmic still supports MwM.  So that's still good. 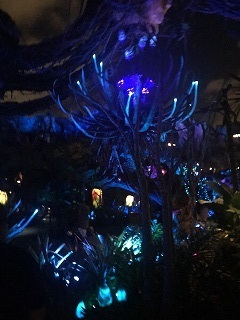 I was really interested to see if there were any Made with Magic codes shooting out over in the new Pandora section of Animal Kingdom.  Kind of seems like a natural.  But I wasn't able to detect any influence on the Paintbrush I was carrying and the folks that strolled through wearing MwM Ear Hats and/or Headbands didn't seem to be affected, either.  So I guess not.  That was a bit disappointing.  Seems like they're missing an opportunity there.

Animal Kingdom is where they sell the Totem Wand to go with the Rivers of Light show.  The two evenings we were at AK I didn't see a single person with one of those devices (me included).  Looking over at the stands during the Rivers of Light show, I didn't see more than a couple of the MwM faithful flying their colors.  What I saw looked to be Ear Hats or Headbands - not totems.  When I came across the displays selling the totem devices, I didn't see a single one that was turned on to indicate what the dang thing does.  Hmmm.  How they gonna sell 'em like that?  Kind of seems like they are bound and determined to see this product fail.  Dang.

Over at Disneyland, it was completely into the Christmas theme.  The light-up choices being purchased and worn were consistent with that theme.  Lots of holiday necklaces and those etched plastic ear hats with a couple of LEDs that alternately light up 2-3 different images.  Made with Magic stuff definitely took a back seat. 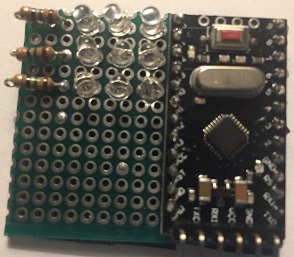 As the Paintbrush is still being sold in the Anaheim parks, I put together a small board with a few 3 mm IR LEDs and an Arduino Pro Mini, grabbed the codes for sending the Happy Birthday tune that I got from Mousie and headed out into the parks looking for folks with birthdays carrying a paintbrush and might like a little surprise.  Seems like everyone wearing those birthday buttons likes having others tell them happy birthday.  I figured this could add a new twist to the celebration.

OK.  First off, security folks don't like the looks of such things.  Not news.  But we worked it out.  Once in the parks I had my first realization.  The number of folks with birthday buttons that were carrying paintbrushes was approximately 0.  So I'd have to get my own close enough to the celebrant without coming across as being too creepy.  Wait lines are one possibility, but I found the ambient park noises to be sufficient to drown out the weak paintbrush speaker's output.  The better opportunity turned out to be the various food areas.  They tend to be a bit quieter.

I've got some ideas on how to improve this hack to make it even more birthday oriented.  I've got a feeling that the ideal person to pull this gag off would be a cast member.  A cast member doing this would be less likely to creep out the birthday celebrant.

Concerning the shows, the holiday fireworks show did do a little something to my paintbrush.  Not really impressive.  There wasn't a pre-fireworks projection mapped show on the castle.  So nothing there.  Some of the guys have recorded some codes from the new Fantasmic show but I still haven't made it over there to see that one.  Way too crowded.

Anybody else get the feeling that Made with Magic is getting pushed over to California Adventure?  I hear that the Paint the Night Parade will be performed over there on special occasions.  And, of course, World of Color is where it all started and it seems still to be going strong over there.  The cart closest to the Paradise Pier area had more MwM items this trip than on my last trip.  But the other carts?  Not so much.  I'd purchased MwM stuff from the store next to Grizzly Peak Rapids in the past.  Completely gone from there now.  Hmmm.

Dancing with the Stars

Each year this series has an episode with a Disney theme (ABC, you know?).  This year is no different.  Check out the Fisher/Arnold foxtrot video from this year's Disney night and you'll see the audience all lit up with Ear Hats.  Or view the entire Episode (Season 25, Episode 6 - 10/16/17) using the ABC app.  Clearly, they're still running Made with Magic out there to try to get folks excited.  Nice. It would be nicer still if they would at least mention that the audience is wearing Made with Magic hats.

Made with Magic Merchandise gone missing

The Mickey Mitt bites the dust?

One development I was sad to see, but not all that surprised by, was that the Made with Magic version of the Mickey Glove was no where to be found.  Sniff.  It was my favorite device to use as a source of Made with Magic components for repurposing.  Dang.  Looks like the replacement may be a simpler device that has a lot more dumb LEDs and is driven by "high five-ing".  Instead of trying to describe it, just have a look at the video on the right.  It says it all.

If we've seen the last of the Mickey Glove, I guess the next most accessible device to hack is the Sorcerer's Wand.  Wouldn't be my first choice, but there you have it.  RIP Glove device.  You'll be sorely missed.

Chernabog no longer anywhere to be found

Fantasmic is back on the Rivers of America.  I hear it's a new show, but I haven't seen it yet.  WAY too crowded in that section of the park when Fantasmic is gearing up.  But I did snoop around to see if the Chernabog sipper cup returned, too.  The answer seems to be - nope.  No sign of it anywhere.  In fact, not much MwM stuff on the carts there in New Orleans Square.   Hmmmm.  Guess anyone with a Chernabog should hold onto that little collector's item.  Could be worth a pretty penny someday.  At least, that's one way to look at it.

Merchandise still hanging in there

World of Color Sipper Cups still at the desert party

Noticing that the Chernabog sipper has bitten the dust, I was curious if the World of Color Sipper Cups are still available at the Dessert Party.  Peeking over the rail, I did see a row of shining new WOC sippers all lined up and awaiting their new owners.  So that's good.  Once again, I asked about how a party goer manages to get one of those and the cast members near the railing didn't seem to have a clue.   The servers should know, but there's no easy way to get at them.  So....

One of the things I've often heard about the Paintbrush is that it is only available in Parks that are hosting the Paint the Night Parade.  That being true, I wondered if it would continue to be available in the Anaheim after the Paint the Night Parade concluded.  So far, it has.  Then again, I hear that Paint the Night isn't entirely done in Anaheim.  I've heard it will move over to California Adventure on special occasions.  Interesting.  At the very least, that suggests the Paintbrush will live on for a while in the Anaheim parks.  That's great as it's the only MwM device that does tunes.  It would be a shame to lose it.  Guess we needn't worry about that in the immediate future.

There may be a good explanation for why Made with Magic stuff has not been prominently displayed lately.  It seems the product line is undergoing a refresh cycle - version 3.0.  I wrote a little about this new product line elsewhere, so I won't rehash all that here.  They were scheduled for release on November 17th and that's exactly what happened.  Apparently, these should arrive just in time for the “The Wonderful World of Disney: Magical Holiday Celebration” that will air on Thursday, November 30.  These new hats are supposed to glow along with the broadcast if connected through the parks app.  Will be interesting to see how this works out.

So far, it looks like this new line of MwM items is limited to the Ear Hats.  Searching the Shop Disney Parks app for Made with Magic, all that comes up now is this new hat.  Nothing else.  Time will tell if the new tech gets incorporated into other MwM merchandise.  Hope so.  Those new hats are spectacularly ugly and the dang things never even come close to fitting my head.  Now let me see.  Where did I put those fabric paints?