Made with Magic controllers - Arduinos, part 2

The previous article gave power to the people 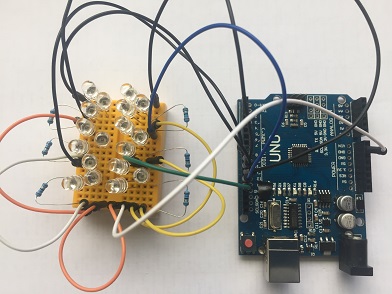 In the first article on using Arduinos to control Made with Magic products, we covered a lot of ground.  The emphasis was on getting a lot of infrared signal output from the Arduino.  I showed that a single Uno can drive 18 IR LEDs without having to resort to additional transistors or mosfets and without requiring additional external power input.  That setup will probably generate enough signal to hit most targets in a typical room in a house.

If you went with the suggested Arduino clone, the 20 IR LEDs from the source linked to and added some resistors, mini breadboard and connection wires, you're probably up and running for under $20.  That didn't hurt too badly, did it?  If you got bold and took a chance with one of those really cheap clones available on eBay and utilized some stuff you had laying around, it's possible you made it happen for under $10!   And, if you took a peak at some of the suggested links to the actual Made with Magic codes, you now may be able to get a whole room full of devices to obey your command.   What could be better?  How about the ability to control individual targets?

Resisting the Borg's plot to take over the room

Some of the Made with Magic products are designed to synchronize their light effects with one another, especially the Ear-type products.  When that happens, they're just doing what comes naturally.  That's kind of fun in the Parks as it gives your little group an aspect of solidarity.  However, it's not always an ideal behavior for re-imagined (hacked) creations back in the living room.   When the hanging lamp, the castle and the flowers all start flashing the same effects at the same time, it's as if they've somehow conspired together and are amassing strength prior to seizing control of the room.  Ominous and annoying.  What I used to do when that happened is just shut them off or cold bloodedly blast a code for some solid color just to make them behave.  Rebellion squashed.

The early days of working with multiple Made with Magic items taught me a couple of lessons.  One, most of the time I don't want them to be doing their flashing thing, I just want them to function as simple lights.  And two, the different hacks have different personalities and I want the lights to reflect and support those unique personalities.  Using a controller that blasts the same signal throughout the room, it's possible to tame the flashing, but, by itself, it can't set individual targets to give different responses.  That requires a different approach that we'll discuss next. 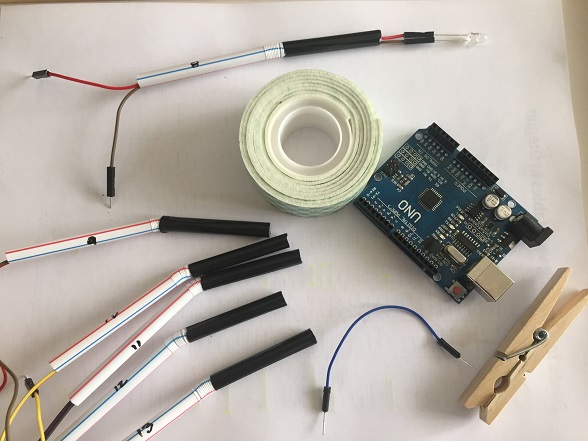 In this article, we'll continue to leverage the ability to bit bang Arduino pins that was described in the first article.  But, instead of turning all the pins on at once and flooding the room with the same signal, we'll sequentially turn on individual pins controlling LEDs that are carefully aimed at individual Made with Magic targets and send different codes out to each target to achieve individualized effects.   I'll also share the little bit that I know about the Made with Magic codes that are designed to support addressing different targets and how to use them.

Advanced warning: it takes a good deal more fiddling to make this work.  More wires.  More resistors.  And it usually works better with, or flat out requires, two microprocessors.  But the extra effort and expense can be well worth it!   It can make coexisting with Made with Magic hacks a lot more enjoyable and even render them downright useful.  It really changed the way I think about these hacks and the roles they can play in our home.  Maybe it will do the same for you, too. 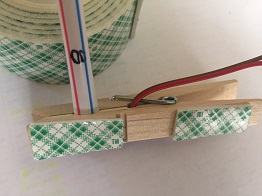 If you went with the Uno model that was recommended in the last article and want to target 6 or fewer Made with Magic items, the good news is that you probably won't need to change the program from that article to make this work.  The tricky part will be limiting the IR signals to the intended target and ONLY the intended target.

Infrared light is just light.  It will happily reflect off surfaces, including the surface of the targeted item, and bounce around the room also hitting unintended targets!  If your targets are located close together, it will be harder to keep the light from spilling over.  To make this work, the LEDs attached to each pin will need to be pointed directly at their target.  Won't work if they're all nestled into the same breadboard.  That means you may need more and/or different connecting wires.  Usually, fewer LEDs will be required per pin/target.  It often only requires one LED for each.  That means changing resistors.  A 1.5V IR LED consuming 20mA of current needs a 178 - 180 ohm resistor.  Two LEDs in series running at 20mA will need a 120 ohm resistor.  But those are often just starting points.  Higher resistor values may be needed to further limit the amount of light from each LED if surrounding targets are also getting the signal. 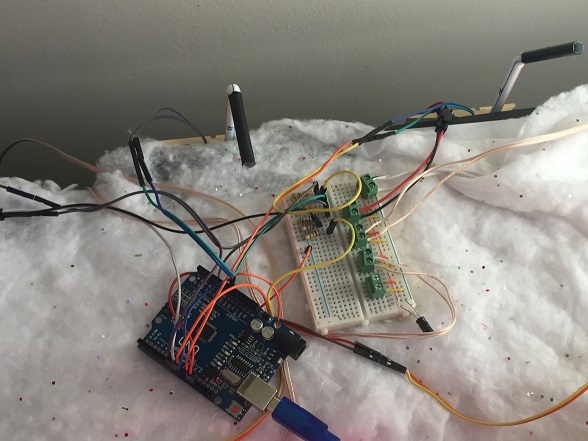 Narrow beam LEDs, such as the ones described in the first article, are essential.  I've found 1/4" diameter drinking straws to be particularly helpful for both aiming and restricting the IR beam.  A 5mm LED slides perfectly inside.  The straws will probably require covering the outside with electrical tape, paint or shrink wrap as plenty of IR light tends to escape out the sides of most straws if that isn't taken care of.  Of course, it doesn't have to be a straw.  I only suggest those because they're cheap and readily available.  I've also tried 1/4" drip irrigation tubing with 3mm IR LEDs. That also works, but is not a very practical solution.

To hold the bases of the straws in place, I went with clothes pins from the Dollar Tree fastened to the back edge of the shelf with mounting tape.  The larger hole in the clothes pin fits the straw nicely.  The smaller hole fits the wires perfectly and provides a little strain relief.  And the mounting tape does what it does.

Assuming you've replaced the resistors, attached the wires, slipped the LED into the straw and have it pointed at it's intended target, you're ready to give it a test.  Plug the Arduino into the computer's USB port.  Fire up the Arduino IDE software.  Make sure the board matches what you're using and the port is set correctly.  Then open the Serial Monitor.  Check to see that the setting in the lower right corner (baud rate) is 115200. The part of that window to focus on is the segment shown in the table with the pin data.

That data is telling you that an attempt was made to assign values (hexidecimal notation) to variables in the targeted Made with Magic items that may be used to single them out when using the appropriate Made with Magic commands.

Since the Uno only has 6 pins to test, we can use the basic color palette (0x6?) for this test.   When the codes in the test table (hex) are copied, pasted into the command line of the Arduino IDE's Serial Monitor and submitted, the colors indicated should be displayed by the appropriate targets.  If that's what you see (check out the video below), great.  You've got it made.  If not, don't worry.  Some additional fiddling should make things come around.

Interpreting the results and troubleshooting

When I think about it, there are two general categories for what can go wrong:

Why the targets don't receive the signals

This first category covers when targets simply didn't get the commands.  Here's some reasons why that might occur:

Why multiple targets get the same signal

The second category can be more labor intensive to solve.  Essentially, there are two basic reasons for this problem: the aim of the signal is not exclusive and/or the signal is too strong and is indirectly reaching other targets.

If you're like me, you have a couple Made with Magic products, and/or hacks, in a row on a shelf that's against a wall.  The distance between them ranges from 10" to 12".

For this to work, the LEDs have to be against the wall facing out towards the target to prevent signal bouncing off the wall and hitting the other items.  However, I want to sit comfortably across the room with my computer so I can type in the commands and see all the responses by the targets in front of me.   This requires either a really long USB cable to reach an Arduino located with all the other components along the back wall or some really long connecting wires for all the LEDs to run them across the room to an Arduino attached by a normal length USB cable to the computer.  Neither of those options are practical.

After fussing with the situation for a while, I finally settled on dedicating one Arduino to initialize the Made with Magic targets and to set the default lighting effects.  That Arduino is located behind the targets and connects to the IR LEDs with the usual Dupont-type wires.  Each time it's turned on it runs the initialization sequences and also sends out codes to set the desired lighting effects for each device.  That's what you see in the video.   Three of the items are running on batteries: the Earhat, Headband and Totem.  The flowers (Glove components), castle (Chernabog components) and rose (WOC components) and the Arduino, all switch on around 17 sec.  By about 24 sec, all the devices have been initialized:

As you can see, it works.  For this test I used both 180 ohm and 390 ohm resistors.  Both appear to do just fine. Expand the video to full screen and you should see there, up against the wall, those 'spotlights' aiming at each target and making the magic happen.

To enhance the program from part 1, ArduinoMWMController.ino, to include setting display effects, find the following line near the top:

Then insert the following directly below that line:

//skip spaces between codes to save memory. initialize to solid color Uno pins

You can substitute whatever effects you want.  The 8C0FA911 part is not really required.  I put it here to remind me of what the values should be when targeting from a separate controller.  Starting with 24 is a good idea to wipe out any effect that might already be running.  Finishing with D005FF will hold your effect and prevent the targets from slipping back into demo mode after 2 minutes.  What goes between the 24 and the D005FF is up to you.

Now find the configLED function and replace it with this version:

Alter a copy for a second Arduino so initializations aren't overwritten

ArduinoMWMController.ino comes with code to send out initialization data.  If another Arduino has already set those initializations, you won't want to mess those up when using a different controller.  We need to comment out the part that wants to mess things up.  Find the following code and comment it like so:

Save the changes and then upload it to whichever Arduino you'll use to blast codes to all the targets at the same time.

Using code to dynamically target initialized Made with Magic items

Once the individual MWM items have been successfully initialized, any one of the them can be singled out after that by using the appropriate 8C XX A9 YY command.  Check the second table above for the right values to use for each of the targets associated with their respective pins.  For example, sending 8C 17 A9 19 24 67 D0 05 FF to all the targets will cause the flowers in the video, and only the flowers, to turn white.  Then sending 8C 27 A9 29 48 88 D0 05 FF will cause the castle to start displaying the 48 88 effect - and only the castle.  Substitute any valid codes you'd like for any of the targets you'd like.  The good folks at Disney Imagineering designed things to work this way.  Kind of fun, isn't it?  Enjoy.