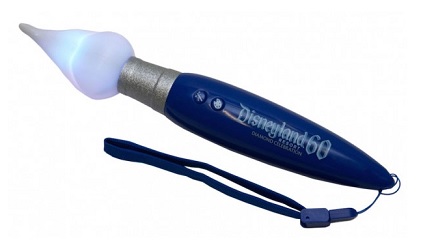 The consensus is that the Made With Magic Magic Paintbrush is only available in Disney Parks that are featuring the Paint the Night Parade.  It first appeared in October of 2014 at the Hong Kong park. Later in 2015, it made it's way to Disneyland Park as part of the 60th Anniversary celebration and the running of Paint the Night at that park.

It's unique feature is it's speaker and the capability to play simplistic electronic tunes.  Other than that, it functions very similarly to the Magic Wand.  It was a very popular item while the Paint the Night Parade was going on.

As would be expected for a product designed to be a MWM controller, the Paintbrush has the same two buttons that were found on the Wand and they act the same way.  For details, consult the Wand page. It has a smaller illuminated portion and a larger handle area than the Wand, reflecting the different motifs for the two items.

As indicated in the title, this teardown features version 1.3 of the GlowBrush.  To see more detail, go ahead and click the picture on the right for the front side view.  The pic below gives the backside view.

Like all the other MWM products, except the Wand, the Paintbrush is powered by 2 AAA batteries.  Looks like the usual boost regulator is here, too.

The 5mm, water-clear Infrared LED is attached to an elongated PCB, unlike the Wand which simply ran longer wires out to the LED.  With fresh batteries, the signal was good out to a little over 20 ft, using a Headband as the target.  About the same distance as with the Wand but the aim was more critical with the Paintbrush.  Just a hair to one side or too high or too low and the signal wasn't received.  The view angle of the signal struck me as being even tighter than with the Wand.  If I had to guess, I'd say it's on the order of 10 degrees or less, if such a LED is available.

It's the same microprocessor as was found in the Wand, the TI MSP430G2755, making these devices the only two products in the MWM line that use this processor.  Apparently, additional memory is required to handle the requirements of storing and sending more codes than the other MWM devices have to deal with.  This is particularly true for the Paintbrush as it not only handles the same set of transmittable codes that the Wand handles, but it also manages a bit of audio on top of that.

The same NPN transistor that was found in the Wand is also present in the Paintbrush - although at a different location.  With the Paintbrush, the transistor is located half way down the elongated portion of the PCB.  You can see it in the enlarged photo that will come up if you click the first pic under this section.   I'd heard from other owners that they felt the range of the Paintbrush's transmissions isn't as far as the Wand's.  I can see where they might have gotten that impression.  I found that the aim is more critical with the Paintbrush than with the Wand.  However, I was able to get approximately equal ranges from both devices.  YMMV.  But that's my story and I'm sticking to it.

OK, now we encounter a major departure from the Wand's architecture.  The Wand used 5mm, water-clear, through-hole RGB LEDs while the Paintbrush goes with surface mounted RGB LEDs.  No doubt, the decision to go with the SMT LEDs is the reason for the elongated PCB found in the Paintbrush.  Having that PCB between the two LEDs also does a little better job of defining the left-right effects but they're still so close together that it's often hard to figure things out.

Now we get to the really unique features of the Paintbrush - it's audio capabilities.  There's a small speaker on the underside of the PB, just above the on/off switch.  Wires connect it to the SP1 and SP2 points on the top side of the PCB.  Right next to those connections is a chip that hasn't been found on the other PCBs.  Markings,GPY0030C, indicate this to be a General Plus audio amplifier that drives output to the speaker.  I don't see a dedicated DAC on the PCB.  Given the number of capacitors and resistors found in the immediate vicinity of this chip, I'm guessing that the audio signals are generated by PWM output directly from the 430 processor, as described in the GPY0030C documentation.

The Paintbrush has the same two code transmission-related buttons that are found on the Wand.  It,too, sends out three code phrases each time the send button is pressed.  Near as I can tell, it iterates through the same seven templates that were described in the Wand write up so I'll simply refer you to that page for details.

Finally, we come to the most interesting part - the audio capabilities.  With the first push of the send button, you'll know this is not just a repackaged Wand product - you'll hear a sound, not unlike the sound often heard when Tinkerbell waves her magic wand.  Nice.  And your Paintbrush just might bust out into a tune while hiking around different areas of the parks or during some shows, especially around Paradise Pier.

Community member, Mousie, has looked into all this and came up with some interesting discoveries.  I'll try to summarize his findings and chip in a couple of my own.  Hopefully, I won't mess it up too badly.

How does the Paintbrush manage sounds?  Obviously, the transmission-linked sound has to be stored in the device as it's not necessary for the device to be exposed to any of the parks for it to work.  And?  Well, if you have a means of sending command codes to the Paintbrush, you may be able to get it to play part of the Electrical Parade tune by sending:

That should work if things haven't been altered since the device was powered up.  So that code must be stored someplace in there, too.

Other audio may be uploaded to the device by sending code phrases that begin with 32h followed by a memory pointer that starts with 00 and increments by 06h with each subsequent transmission of the required 12 data codes.  The data code segment has to be a full 12 bytes.  The phrase concludes with the usual checksum byte to verify valid serial transmission.   If the tune ends before using up all the bytes in the 12 code segment, the remaining codes must be assigned FFh to pad the command.  For example, here is the World of Color tune:

After successfully uploading those codes, you should be able to play it using the command 90 33 9F.  To erase that tune and return silence in response to sending 90 33 9F, send a command that includes the codes 40 A1 10.

What's going on with those data codes?   According to Mousie, the codes that begin with D are tempo codes.  The lower nibble of that byte is the numeric value for the current tempo.  All tunes begin with a Dx code.  The codes that begin with E are octave selectors, with their lower nibble defining the desired octave.  The second byte of each tune will be one of those Ex codes.   Codes that start with 0-C are codes for half notes.  The lower nibble indicates the relative length of time that note should be held in relationship to the preceding Dx tempo code.  Here's a listing of the half note codes:

Once the tune begins, the tempo bytes and/or octave bytes may be redefined inline at any point in the tune.  You can see that in the tunes above and below.

We haven't yet tested the full limits of the buffer size.  The longest recorded tune is for the Electrical Parade tune, which is 4 phrases long:

So the audio buffer must be at least that big.  Is it any bigger? TBD.