Made With Magic Merchandise

Glow With the Show is born

On June 15, 2012, The first ear hats became available at Disney's California Parks and were supported at World of Color (WOC) and the Mad T Party, both at California Adventure.  They were introduced as  'Glow With the Show Ears'.   Within a couple of months, support rapidly spread to Disneyland and Disney World.   For $25 you get a battery powered, wearable device that can be remotely controlled to precisely synchronize RGB LED effects to music.  There's even a Mickey Ear Hat thrown in just to sweeten the deal.  Fantastic.

This video from August, 2012 describes some of the tech behind the devices and hints at many of the built-in capabilities.  Show commands are sent using infra-red light.  Audiences may be divided up into zones.  Each device has a unique serial number that may be utilized to elicit differential responses.  Together, those aspects allow sophisticated geo-spatial manipulation of audience responses for some spectacular effects.  Not only that, the devices are capable of interacting with one another to coordinate effects.  It's a very intriguing technology to explore.

In early October of  2014, Disney's Paint the Night was announced at Disney's Hong Kong Park.  That event ushered in new devices, including the paintbrush, headband and glove.  The devices were promoted as being capable of interacting with the parade and enhancing audience participation.  The write ups also described another intriguing possible interaction with Magical Art pieces. 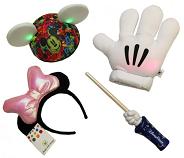 Later that same October (2014), availability of new devices was announced for US parks:  a Minnie Mouse-inspired headband, a Mickey Mouse glove and, a magical wand.  That announcement also served as notification for a name change  - "Glow With the Show" became "Made with Magic".

The Magic Wand is particularly interesting.  It not only receives MWM codes, it can also select from numerous pre-stored code sequences and send those to control other MWM devices!  There is, of course, a trade-off.  That functionality comes at the expense of being able to sync with other MWM devices.

The Mickey glove is the first commercially available MWM device to feature 4 LEDs instead of the two that are featured in the previous devices.  It also sports light tubes attached to the internal LEDs that transmit the light up into the fingers of the device to spread the glow thoughout a larger portion of the glove.   But don't cut off that white side tag!  That's where the infra-red receiver is located. 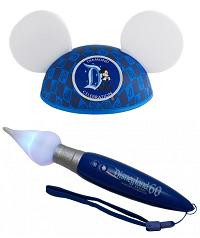 Two new items were introduced in May of 2015 to celebrate the 60th anniversary of Disneyland.  The paintbrush finally made it's appearance as Paint the Night came to Disneyland.  In addition, the familiar Ear Hat got a 60th makeover and a whole new internal design.  Single AAA battery holders are now located under each 'ear' and recessed deeper into the cap than previous designs.  The emitted codes also changed and more closely match the format of all the other newer devices.

The paintbrush is not just a repackaged Magic Wand.  Like the wand, internally stored code sequences may be called up and sent to control other MWM devices.  It, also, does not sync with other MWM devices.  However, this little jewel has a built-in speaker that can play little electronic tunes!  A feature not present in the Magic Wand.  The trade-off is that it has fewer internally stored patterns to choose from than are available in the Magic Wand.

Have a Cup of Made With Magic 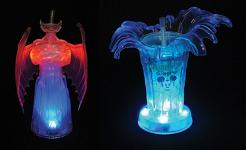 Lots of folks just love having flashing LED cubes in their iced drinks.  So it was probably inevitable that Made With Magic tech would work it's way into that mix eventually.   Sure enough, in July of 2015  two MWM sipper cups were announced.   Both devices, the Chernabog Sipper Cup and the World of Color Sipper Cup have 4 LEDs, each.  Chernabog has two LEDs in the base and then two LEDs higher up in the arm region, whereas all 4 LEDs are located in the base of the World of Color sipper.  It's hard to tell from the pictures, but both of these items are fairly hefty devices!  The World of Color sipper is available at California Adventure and Chernabog is available at Disneyland. 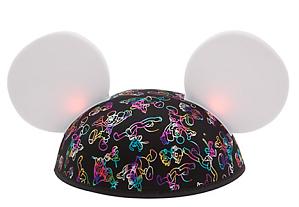 Not sure when this actually arrived, but as of Feb 1, 2016, this new item was listed for sale in the Disney Store.  It looks like the old Ear Hats have received a facelift!  From first impressions, I'm guessing that this new hat is going to be structurally the same as the 60th Anniversary hat.  The base of the ears is certainly the same.

The Headband gets an upgrade

Again, there wasn't a big fuss when this item was released, so I don't know the actual release date.  I ran across it in Disneyland around Sept 2, 2016.  For details about this item, check our page for this item

After working with these devices for a while, I can say that it seems like most of these devices may operate in as many as three different modes.   There is the stand-alone mode that each device enters immediately upon being powered up.  A limited number of stored code sequences are played back, randomly changing every couple of minutes, such that the devices are entertaining all by themselves.   The lights are always blinking, one way or another.

Each device can also enter a second, responsive show mode as soon as the appropriate show mode infra-red codes are received from a show code transmitter.  Unless instructed otherwise, the device will remain in show mode for about two minutes after the last valid show command is received.

After that period elapses, the device will either revert to stand-alone mode or maybe respond to peer signals and enter the third mode: peer-to-peer mode.  In peer-to-peer mode, devices will sync and begin displaying the same LED effects at approximately the same time.  It's particularly fun to see when a bunch of these devices start syncing together.

Clearly, a lot of thought, engineering and programming has gone into the creation of these great little devices.  It makes it a lot of fun and a real pleasure to get to know each one a little better.

For More Info About Each Device