I've been kicking the tires on the new Ear Hats for the last couple of days.  Lots of new stuff to talk about.  I'll leave some of it for the eventual teardown but I want to rattle off some of my observations while they're still fresh in memory.  And we just had the first Disney broadcast that includes Made with Magic support for these new hats.  I've got some observations on that, too.

Is the IR tech dead?

Disney has made no secret that the new Ear Hats will utilize Bluetooth tech.  What does that mean for the legacy IR tech?  The tag that is affixed to the devices says they will sync with other MwM devices and respond to the Disney transmitters, like the Wand, etc.  So, what do they mean by sync with other devices?  Only the new 3.0 devices or also with the older devices?

Next up, will the new hats accept a stream of commands like the ones sent out during the previous MwM supported shows?  To test it out, I sent the codes from the Osborne Lights' Jingle Bells script at the new hat and found that it either couldn't keep up or didn't understand the commands sent.  Consequently, the new hat often sat dead in bed while the legacy items madly blinked away throughout the playback.  That was a bit disappointing.  I'm gonna guess that Disney will need to carry both IR and Bluetooth feeds for a while if they want to avoid pissing off legacy device owners.  Hmmm.

But, in my case, not so gracefully.  Another new wrinkle ushered in with these devices is the promise to be able to enjoy blinking along with Disney TV specials back home.  This is a big deal.  It makes it meaningful to pack the MwM merchandise back home and continue to enjoy it in the comfort of your own house.   This has been a missing piece in accomplishing the success of the this merchandise (in MHO).

The new enabler for this feature is - the updated Shop Disney Parks app?  An unusual landing spot for such a tool.  Hmmm.  But there it is.  Two modes are offered by the app.  You can directly adjust the color of each ear and adjust the rate of blinking.  Or you can connect to a broadcast special that provides the logic to accompany the show. 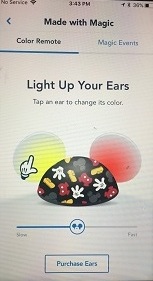 The direct controller isn't all that impressive.  It's pretty limited in what it can do, but it's better than having nothing else to work with and the price is right.  The TV transmissions work on the new Ear Hats but do nothing to the legacy merchandise.  So there's that.  Not a holistic solution.

In my case, the app didn't work for me.  I've got an older iPhone 6 and nothing I did would get it to work with the app software.  Completely dead in bed.  Luckily, the Mrs has a newer version of the iPhone and hers did work, first try.  My take home from that fiasco is that Bluetooth > 4.0 may be needed for this to work.  That's my guess.  No data is available from Disney concerning hardware/software requirements for this setup.  We have to make it up as we go.

The most interesting aspect of the new app's capabilities is the connection to the TV broadcast.  Once I was sure that the Mrs' phone is compatible with the setup, I fired it up and immediately noticed a prompt saying it was listening for the show audio!  Then I remembered that the app requested access to the microphone when I was setting it up.

So does that mean that the data is somehow embedded in the broadcast audio?  Looks like that's true.  I recorded the broadcast to a DVR and when I replayed the recording, the app responded just like it did during the original broadcast.  So, if you lacked the new Ear Hat before the TV special and you happened to record it, you can probably go and acquire a new Ear Hat and then come back to your recording to see what the magic is all about.  That could turn out to be a big thing when I think about it.  Quite a few of us have struggled to take recordings and re-sync the MwM codes with the media.  Then we needed to come up with players for the MwM stuff.  No need for any of that now  with regards to the TV broadcasts - if you have the new tech.

Not everyone gets to play

That brings us around to the topic of the legacy MwM equipment.  What about those devices?  Do the new devices relay the data to the older devices?  After all, they can sync with older IR devices, so why can't they relay the commands?  Well, it turns out they don't. The legacy merchandise was entirely unaware there was a show going on during the TV broadcast.  Dang.  So I come back to the notion that Disney will have to support both Bluetooth and IR protocols until they're confident that the older devices have been retired.  Guess we'll see.

I read that Low Energy Bluetooth should be good for 30 or so feet.  What I experienced was that getting the Ear Hats too close to the TV rendered them unresponsive - no matter how close the phone was.  OK.  Fair enough.  I also noted that the orientation of the phone affected the reception of the codes.  Best reception occurred when the top of the phone was pointed in the direction of the Ear Hats.  If the phone wasn't positioned just right, one or the other of the two Ear Hats would not respond even though the distance to the phone was less than 15 ft.  I read that a lot of things can interfere with Bluetooth signals.  Makes it hard to predict what's going to work and where.

The more, the merrier

At least, when it comes to Ear Hats.  Well, at least up to 7?  I read that the maximum connections a master can make is around 7.  Does that translate into a maximum of 7 of these gizmos that can be controlled with a single phone?  The more I read, the more confused I get about this topic.

Speaking of phones, we found it works best if a single phone is connected and directing the show.  Add in more phones and a bit of confusion seems to get introduced to the mix.  When a single phone was used, I saw the best show response.  Using two of the new Ear Hats, it was easy to note that the hats would often display different effects - just like the crowd in the TV broadcast.  It's going to be interesting to figure out how they implement those varying responses.

Just like that, we have new protocols to investigate.  What's up with the Bluetooth and the data over audio stuff?  Lots of things to look into.  What's going to happen to all that legacy merchandise?  Hmmm.