During my usual weekend keyword searches, I ran across an interesting announcement from The Darian Lake Theme Park in NY.  They  announced  "glow with the show" updates to their evening Laser Shows, starting in the latter part of this upcoming May.  It was that "glow with the show" part that caught my attention.  Their announcement doesn't go into details about the tech involved.  However, they did announce they'll offer a fairly wide variety of LED devices that they promise will synchronize with their show:

The price for these devices is only $8@.  That's quite a bit cheaper than any of Disney's Made With Magic merchandise.  So I wanted to find out more about their offerings.

Sleuthing a potential source of their devices 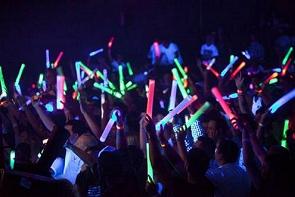 A piece in The Buffalo News refers to these as items as "Colorblast", using radio frequency for their control.  That same article includes an image that shows real people holding actual wand-like devices that match the artist rendering in the theme park's announcement.  So maybe we have an idea of what these gizmos will look like.

Searching on the keyword "Colorblast", I got hits leading to fairly high end Phillips equipment, magic marker-type pens and colored dusts that people throw on each other, but nothing that resembles the glow wands in these pictures.  Searching, instead, for radio controlled LEDs leads to a multitude of hits.  Most lead to remote controls for LED strips - not exactly the same thing.

Sifting through the background noise, three relevant hits were found that involve wearable performance-oriented LED gear.  There's Xylobands.  They're mostly into rf controlled wristbands.  I'll circle back to them in a future post as they don't seem likely to be the ones behind the Darien Lake gizmos.  And there's also Sendrato.  Looks like their focus is wrist wear, too.  So we'll get back to them in the future, also.

The closest match I found to what is seen in those pics are offerings from Shenzhen Fire-Wolf Electronics (gotta love that name!)  as seen in this YouTube video:

Didn't find rf controlled headbands nor swords, but they do make LED containing headbands and swords, so maybe adding rf would not be difficult for them.  Clearly, these guys have supplied some concerts by big name performers.  So maybe they're the ones supplying Darien Lake?  At this point, they seem most likely of the ones readily found by searching on the Internet.

Reading the specs for those items, it's curious that they only support the 6 basic LED colors!  No indexed color palette with PWM in these devices.  That seems a bit primitive but, apparently, good enough for selection by some big time performers.   Scanning some of their YouTube videos, it seems that some of their devices incorporate various color chase schemes.  Hard to tell if those options are programmable or are limited to the buttons on their push button rf controllers.

Back to YouTube. The Fire-Wolf folk have a video that demonstrates their  devices communicating at three different rf frequencies:   315MHz, 390MHz and 433MHz.  Using three different frequencies, they could easily segment an audience into, at least, three parts.

I'm guessing the transmitters are those little white boxes with the buttons shown in this video and hooked to a computer in the video above.  The thing that really jumped out me from that video is the range they claim for the transmitter coverage: 1000 meters!  The Made With Magic hackers struggle to get coverage from the front yard to across the street, let alone 1000m.  Dang.  I'm beginning to see the attraction.

I poked around their website to see if I could find out anything about the computer interface and/or any programmable codes to allow sequencing in time with audio/video/lasers.  The first video shows the transmitter hooked via USB to a computer and the device outputs controlled by clicking on options displayed on the computer screen.  Can't imagine that concert promoters would buy into such devices without some sort of sequencing capability.  Maybe that info will surface later.

I didn't find as much info about the Darian Lake setup as I would have liked.  I took a guess that they may be using merchandise from Shenzhen Fire-Wolf Electronics.  Might be right and then it might be wrong.  Still, it was fun to explore some different products.  Didn't find tear downs nor much about the Shenzhen Fire-Wolf Electronics' transmitters/codes.  The main thing I got from looking into their stuff was an appreciation (envy) for just how far their RF signals can reach (also assuming their transmitters are FCC approved).

While researching, I stumbled across the other companies offering LED devices intended for enjoying as part of a performance/concert.  When time permits, I'll write up my notes on those, too.  I find it really helpful to survey what's out there and use that info to speculate on directions that Made With Magic tech might head in the future or just to stimulate new ideas on things to try myself.