It starts with a Glove-topus 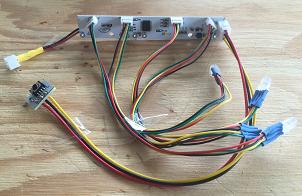 ​When all the wires are connected to a customized Glove board, it does somewhat resemble an Octopus, or perhaps a Jellyfish, with all those 'tentacles' flopping all over the place.  They have a tendency to tangle up and get everywhere they're not supposed to be.

Fortunately, we can tame those rascals and put those pesky tentacles to good use.  For this hack, we'll 'stretch' a couple of those tentacles all the way out into a couple of smaller separate lanterns to bring three lanterns together to form a single hidden Mickey Lantern.

And ends with a Hidden Mickey Lantern

This video shows the final product and goes through the codes stored in the Glove board in order to give an idea of what you'd likely see if the device is simply let run it's own internal routines.

I find the internal Glove board sequences to be more pleasing than some of the ones found in other MWM devices.

The video also demonstrates how the left/right lighting effects may be preserved by proper orientation of the 'ears'.  That aspect had to be sacrificed for some of the earlier hacks utilizing other devices.

This is the most ambitious hack of the lantern series and requires the most input - but it has also proven to be the household favorite.  If Mickey is popular in your household, it may well be worth the effort! 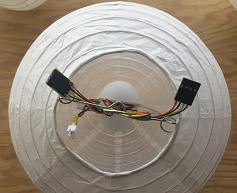 ​ The setup for this part of the hack is not much different from what was described in the previous post from this series so the bulk of those details won't be rehashed here.  Refer back to that post if you need help getting started.

What IS different this time is that all 4 board LED connectors will be used and the battery will be dispensed with in favor of wiring for external powering.  Once this whole thing finally goes together, tearing it apart to replace the batteries will not seem like a good idea.  A two pin 2.0mm pitch JST PH connector was used to connect to the external power line.

The wires that came with  4 pin, 1.25mm pitch sockets and mating wired plugs that were used to customize the Glove board were only about 5.5" long - not long enough to reach all the way up and into the 'ear' lanterns.  Another 3-4" are needed.

I got the required extra wiring from a salvaged telephone extension cord.  Some of those only have two wires, others have all 4.  The ones with 4 wires are very handy for this sort of thing.  I added female Dupont connectors to the opposite end of the wires from the JST plug.  Then I put together 4" male/female extension cables to snake up into the 'ears'.  That's only because I'm constantly connecting all sorts of things to those LED ports and need the versatility.  It would be easier and more straightforward to simply solder the wires together and then solder the other ends to the LEDs. 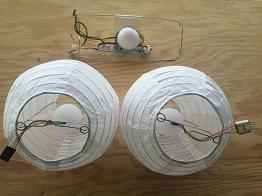 ​Preparing the two 6" lanterns is pretty simple.  Each will get one RGB LED fed up to it by wires from the 8" lantern below.  To get nice, even lighting from those LEDs, a whole Dollar Tree 'ball' is used as a diffuser.  Carefully poke a hole in the 'ball' that's just large enough for the LED to enter and fit snugly.

To hold the 'ball' and the LED in roughly the center of the lantern, 1" wide strips of the scrap plastic sheeting were cut to fit between the wire frame and then taped to the frame with packing tape.  Just kind of eyeball where they should go.  Then use a piece of mounting tape to firmly attach the LED to that plastic strip.  Packing tape didn't seem sufficient to keep the LED/ball in place.

Finally, check the eyelets on the upper rim where the metal frame inserts to hold the lantern's shape.  You'll get the snuggest fit with the smallest gap between lanterns if those eyelets aren't sticking up above the rim.  Ideally, they'll be slightly below the upper rim.  If those can be gently bent down just below the rim, you'll get the best results.

... make the support to hold the ears in place

For this step, here's the deal.  The two LEDs in the 8" lantern need to point out at right angles from the internal wire frame to minimize creating shadows from those wires.   And we want the two 6 inch 'ear' lanterns to line up with those LEDs below so we get that nice left/right effect.  But that doesn't give us a good attachment point for those two upper lanterns.   So something is needed that can serve as support but isn't so bulky that it interferes with the looks.

The best I could come up with is a clear plastic strip with neodymium magnets hot glued in place so  they'll bind to the upper lantern frame and hold it snugly against the lower lantern.  The dimensions needed will vary with each setup.  Substantial variations from lantern to lantern have been noted.  So predicting the exact measurements isn't possible.  But here's some guidelines for how to approach making that support. 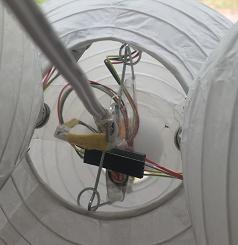 We're almost there.  Feed the power wire through the hole cut in the plastic strap and connect it to the Glove board. 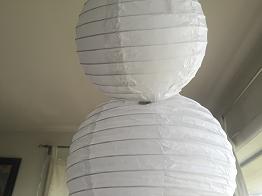 With those magnets in place, it should now be possible to position the 6" 'ear' lanterns and have them sufficiently bind to the 8" lantern without need for anything else to hold them in place.  To diminish the gap between the 'head' and 'ear' lanterns, position those 'horns' so they are binding to the sides of the magnets and not to the surface of the magnet.  As shown in the photo, the magnet may be visible even when the 'ear' lantern is in place.  If that detracts from your enjoyment, you could always wrap in in some sort of white paper to make it blend in a little better.  From a distance most folks are likely to view it from, it isn't very noticeable.

A twist tie was used to connect the power cord to the metal hanger hook to provide a little bit of strain relief.  A zip tie would probably work better.

The power options are up to your preferences.  Could be a battery pack or, as in my application, an old PC power supply with a 3.3V output.  If you need ideas, check the post on powering Made With Magic Devices.

Next up - obedience school

Inevitably, there comes a time when the lights your proud creation wants to flash just don't match what your mood desires.  What works perfectly at 10pm in one of the parks, doesn't cut it at 2am back home after a hard day.  A resolution is made to take command and teach the young upstart how to do your bidding.  That's what we'll take a look at in the next few posts.

Others in this series