The base portion of the WOC Sipper Cup is rapidly becoming my 'go-to' item for a lot of applications.  It's compact.  So it fits in pants pockets and travels well.  It lends itself for use as a multi-functional base for a variety of items.  It photographs as well as any of the MWM devices.  Real handy. 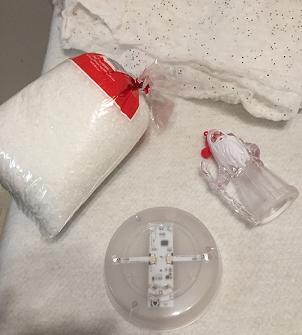 If your figurine still has the bottom LED assembly in it, you'll want to pry that out so the MWM leds can glow up through your figurine (see the Ear Hat hack).  All that's left to do now is to place your figurine on the base and enjoy.

The picture to the left shows how the table covering and artificial snow flakes accentuate the MWM base's glow.  I managed to score a Santa, Frosty and Angel figurine from Dollar Tree and all three worked just fine.

The hack works well even without the cloth covering and artificial snow flakes.  I don't carry either of those props with me when I travel with the MWM base.

Use this as an alternative to the Ear Hat hack if you don't want to/can't disassemble an Ear Hat to uplight your figurines and/or want your figurine elevated on a base/mound and/or want more light on a particular object.  Always nice to have choices.

And, as with all these decorations that may be intended to remain undisturbed for a period of time, you may wish to wire the MWM device to an external power source so you don't need to undo the setup to replace batteries.