Mirradin has recently written up an excellent Instructable describing how a couple Made with Magic Headbands became the starting point for some very nice hacks.

For the costume constructed for Eclectic Elathera, the Headband's Made with Magic components were taken from the Headband and combined with optocouplers, transistors and some strips of 5V dumb LEDs and then incorporated into the costume seen in the video.  Great work.

The Instructable includes info on how the components are powered and about the 3D printing of the harnesses that hold the batteries.  For anyone contemplating an elaborate hack extending into multiple LEDs, this could be a good reference to check out first.

No info was given in that Instructable about the wings part of this hack.  Maybe that will be covered in a subsequent write up. 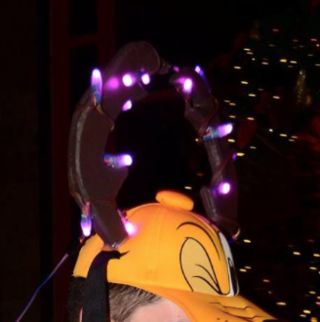 Another hack pictured in that same Instructable is the @PawLUTO's hat.  It, too, was made by Mirradin.  It didn't get talked about there, but I managed to get some details from the owner, Paul.

As you can see, this hack uses bullet-style LEDs instead of the strip LEDs in the other build.  According to Paul, the wires run down from the hat to a small box he carries in his pocket.  So that's maybe another option if 3D printing isn't a possibility.  Actually, I don't really know if that box was printed or not but I figure it wouldn't be too hard to find a suitable box to stick the components into.