Just back from a trip to the Orlando parks.  There were several new-ish MWM developments I wanted to explore while there.  As a bonus, the Osborne Family Lights were extended a couple more days and I managed to get in on the last two.  Quite an unexpected treat!

So here's what there is to report.

MWM Did, indeed, arrive at Epcot 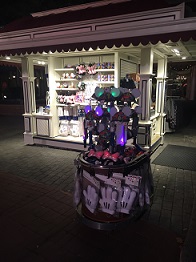 A sight I don't remember seeing before - a cart full of Made With Magic items at Epcot!  The Disney Blog recently announced the arrival of MWM at Epcot and, clearly, it's true.  At present, the only official MWM support is said to be right around the World Showcase area.  And that's exactly where I started picking up the signal.

The current MWM support isn't that ambitious.  The devices simply take on the representative colors of each country when entering the vicinity of their respective pavilions.  Coverage may be spotty within each country's area.  It seemed strongest and most reliable near the boundaries of each pavilion and less reliable in other areas.  In fact, none of the MWM devices in the Canadian kiosk were responding to the the Canadian colors.  The vendors explained that was a 'dead spot' for MWM reception.

Most of the codes collected include a D0 05 FF sequence, which would prevent devices from lapsing into stand-alone mode.  So occasional refreshing of the desired codes might be sufficient to keep the desired effect going and counteract the handiwork of those overzealous magic wand wielders.

Here's what was caught and I hope I got the assignments close to correct:

Made With Magic support is usually associated with a Disney show.  Epcot has it's Illuminations show that runs in the lagoon that's surrounded by the Showcase that now has MWM capabilities.  The natural question that begs asking is - will Illuminations be getting MWM support in the near future?  What I heard from cast members is that they think there are, indeed, plans to do just that.  No timeframe was forth coming.  But it sure makes sense.  Let's hope it's true.

The other Epcot-related rumor that came out recently is that the Osborne Lights may be moved to Epcot.  A post on the Chip & Company site raised this possibility.  They point out that Epcot used to have a "Lights of Winter" show and that Osborne Lights may be moving to the same area that show used to occupy - between Future World and the World Showcase.  Interesting idea. Those guys freely admit this idea is nothing more than gossip at this point. But it's a ray of hope for those of us who don't want to see this go away.