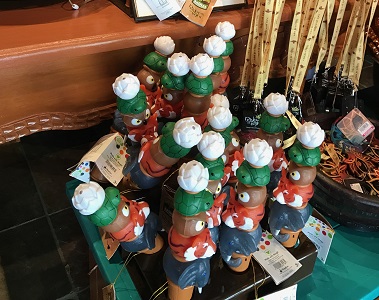 The first difference from the other Made with Magic products is the number of light-up areas.  The Totem has lights in each of the four animal heads and also in the lotus at the very top.  That's 5 light-up zones - a curious odd number - when all the others have an even number of LEDs that obey the customary right-left 'ear' effects.  The Totem LEDs appear to be individually addressable.  Furthermore, only the lotus actually changes color.  The bottom 4 'head' LEDs simply emit white light.

Like the Sorcerer's Wand and the Magic Paintbrush that came before it, the Totem Wand functions as a Made with Magic controller.  The customary palette and transmit buttons are part of the elephant head, located just below the ear on either side of the tusks.  It took me a while to locate them because they blend in well and it's not where I expected they might be. 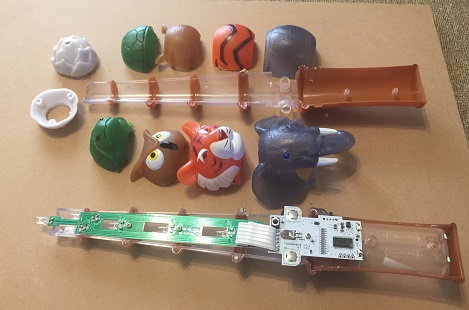 After that, getting the device apart was not so easy.  The halves of the respective animal heads were manufactured to simply snap together around the central clear plastic channel.  However, I'm guessing the decision was made to stabilize the placements by adding some glue.  I had to use a Dremel to get them apart.  So this tear down should be considered non-reversible.  Having said that, the top of the lotus did simply pop off but the bottom half was glued in place and had to be pried off with a screw driver.

Once inside, there are two PCBs that are connected by two 6 wire ribbons.  Click for the respective detailed views: main board-top, main board-bottom, LED board . Both PCBs are secured to the plastic shell with screws.  And the battery terminals extend through the lower PCB and are soldered to the board with a good deal of solder that proved difficult to remove. 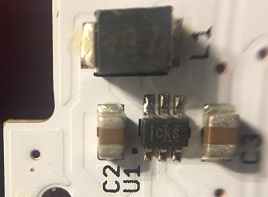 Like the Mickey Wand, the Totem Wand is powered by 2 AA batteries.  It came supplied with 2 AA alkaline batteries listed as mercury and cadmium free.  That should make disposal a little easier.  Maybe these won't need to be treated as hazardous waste.

Onboard, the usual boost regulator used in the other Made with Magic products appears to be used here, too. 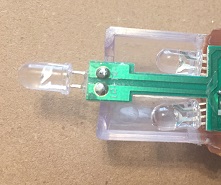 The 5mm, water-clear Infrared LED is attached at the very end of the elongated PCB.  This is more reminiscent of the Paintbrush than the Wand.  With fresh batteries, the signal was good out to a little over 20 ft, using a Headband as the target.  That's about the same distance that was measured when testing the Wand and the Paintbrush.  As was true for those other devices, the beam angle is fairly narrow. 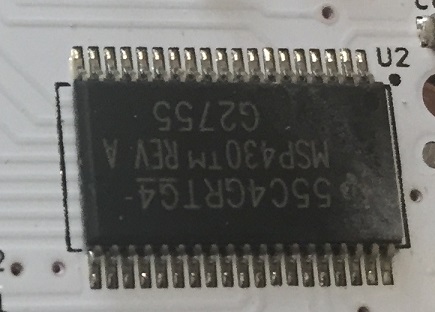 The same microprocessor is present that's also used in the Wand and the Paintbrush, the TI MSP430G2755, making it three Made with Magic devices that use this same processor.  It seems to be the go-to processor for all the MWM controller products.

The infrared receiver is the pan-head, surface mount component pictured on the left.  Other recent Made with Magic products have gone with a through-hole version, instead.  In particular, the newest Headband release uses a through-hole receiver.

The same NPN transistor (chip mark:1F) that was found in the Wand and Paintbrush is also present on the Totem board.

Not counting the IR LED, the Totem board has 6 LEDs: 2 RGB LEDs and 4 white LEDs. The two RGB LEDs are 5mm, water-clear and mounted very close together near the end of the long PCB, just below the IR LED and right above the last white LED.  Being water-clear and positioned so close together, it makes it hard sometimes to figure out what the intended lighting effect is supposed to be.  A problem shared with the Wand device. 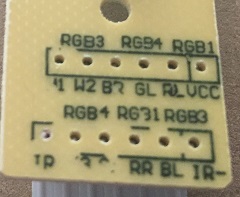 Three of the white LEDs are on the elongated PCB.  The other white LED is on the main PCB.  Mapping the two ribbon connections between the two boards to the respective LEDs should be easy by referring to the printing on the backside of the longer board.  Some of the print is missing in this picture, but it seems like it should be easy to guess the missing connections and/or quickly test them to find out.

Quick presses on the palette button iterates through the same seven templates used by both the Wand and the Paintbrush.  If that's of interest, please  refer to the Wand page for details.