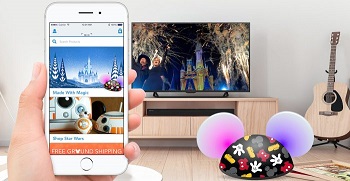 I recently stumbled across a couple of posts describing a new Ear Hat that is in the works.  From the Orlando Sentinel article I learned that the new Ear Hats will interact with TV broadcasts via the Shop Disney app to allow happy owners to glow along with special broadcasts.  The release date given is November 17

Then, from the touringplans.com site, I learned that the tech used for the sync between the phone and Ear Hat is Bluetooth.  And it seems that the upcoming holiday specials will support this new device!

It gets even more interesting in the article over at chipandco.com. They, too, talk about the new tech being bluetooth and syncing with TV broadcasts.  However, they also mention that the app may be used to "adjust the ear colors and speed of the strobe".  Hmmm.  Almost sounds like the app may be used as a general purpose Ear Hat controller.  THAT would be big news!

Heading over to the Shop Disney Parks app and doing a search for Made with Magic, sure enough, the web page says to check back in mid-November to get the new Ear Hat 3.0: Connected!  The now familiar picture show an Ear Hat, a smart phone and a TV screen.  So maybe that will be a viable way to get one of these gizmos if a trip to one of the parks isn't in your near future.  If you happen to get one of these, do share your findings!