A Couple more days with the Osborne Family Spectacle of Lights 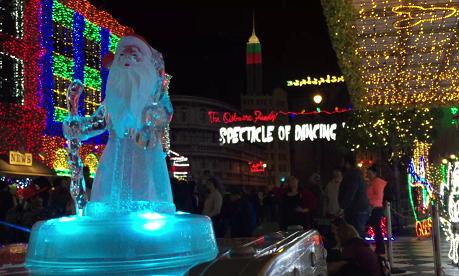 Scheduled to arrive in Florida a couple of days after the official closing date for Osborne Lights, I figured I'd just missed the last showing, so I was very excited when they announced the show would be extended 3 more days and I'd be there for a couple of them!  As a result, I was able to make additional recordings, including a couple for the elusive "Jingle Bells".  Still no Elvis singing "Here Comes Santa Claus" - at least, I didn't catch it while I was there.  Guess that's destined to be the "one that got away".

Some video also was taken to attempt to cover the songs for which I couldn't find an already existing  youtube video with MWM items in view during the filming.  And it was another chance to watch people, see their responses to the MWM offerings and just enjoy being back in the blinking lights one more time. It was great to be back.

As witnessed during my last visit, I saw many people buying ear hats and blinking/flashing merchandise - but few were MWM items.  There was a clear preference for items with a seasonal theme.  The MWM stuff simply can't compete with other blinky/flashy items that have the seasonal flavor that the MWM merchandise lacks.  I guess that the MWM tech isn't sufficiently appealing to overcome it's lack of seasonally appropriate design.

The folks at Disney know that seasonal items sell best.  That's why they constantly rotate the design of the other ear hats and head bands to complement the season.  Yet the MWM stuff hardly changes from year to year.  No idea why the MWM merchandise is left out of the seasonal refresh cycles, but it seems to be.

MWM users add their own 'Seasoning'

There were a few folks out there I saw who decided to take matters into their own hands and modify their own MWM items to give them a touch of holiday cheer.  Unfortunately, most of those folks came and went way before I could get my camera out and/or accost them to ask about their modifications.  So I don't have a lot of details or pictures.  What I can report is my impressions of some of their efforts based upon the glimpses I got.

Most of the mods I was able to recognize involved the MWM Ear Hats.  Some folks wrapped LED necklaces around the ears and top of the cap to add some additional light and blink.  Others attached plastic snow flakes to the cap and/or the plastic ears, giving it a "Frozen" flavor.  Alternatively, some attached stencils/cut-out patterns to the ears such that the light shone through the holes in the attached patterns.  There were some bells added to at least one hat, and what looked like tiny ornaments on another.  Lots of creative people out there adding some great touches to their hats.

I came away thinking that I've got to take some time and go back and research all the internet postings by folks describing how they've modified their MWM items, especially the Ear Hats, and bring all that information together on this website to make it easier for folks to review and then to stimulate their own creativity.  What I've read on the various blogs discussing hat modifications is that many don't like the current hat design and would be interested in having a MWM device if the current design just didn't suck so much.

There's no reason why any MWM Ear Hat must remain in an unaltered state.  If it currently sucks, fix it up so it doesn't anymore.  And then brag about your creations online so the rest of us get inspired, too.  Maybe we just need a series of seasonally themed "Instructables" to get more folks up to speed.   I'll see what can be done.

And as I get the time, I'll work up the Jingle Bells MWM recordings and see about uploading some the videos taken.  Most of the songs now have several MWM recordings for each.  I should be able to begin generating a code consensus and come up with pretty clean recordings for these songs.  Then it's on to seeing how well they sync with the videos.

The audio quality of the available videos varies a lot.  And virtually all of them also have a lot of crowd noise.  Ideally, it would be nice to swap the video audio for clean versions of commercially available equivalents.  A quick check with sources like Amazon, etc, showed that most of the songs used in the shows do have versions that are available for sale online.   I bought a few of those and tried syncing the recordings to some of these commercially available tracks and found that some match more closely than others.  Still haven't extracted the audio track from the videos and compared them with the commercial audio tracks to see if those are the same.  I did notice that some of the timing for the F? series of commands were not what I expected when some of the lines from the recordings that contained multiple sequences were resovled into one discrete sequence per line.  That might be contributing.  The problem seemed to be worst when the valid sequence lengths increased and those ran together on the same line.  Something else to look into.

Almost missed this entirely.  The Disney World page for Made With Magic doesn't list it (hmmm... doesn't list the new stuff at Epcot either), but the new Star Wars fireworks show at Hollywood Studios - "Symphony in the Stars - A Galactic Spectacular" proudly proclaims MWM support!  So, on the last night in Florida, went over to check it out.

The first order of business was to find out where the MWM codes are being broadcast.  Asking some of the cast members we met was not helpful.  Most didn't even know the show now had MWM support.  The folks in the kiosk selling MWM merchandise in the Animation Courtyard - the main fireworks viewing location - hadn't heard about it.  Someone went to find a supervisor and get some information for us.  While waiting to hear back, I took out my recorder and started scanning the area for signal.  Facing where the fireworks would be, I got nothing.  Exploring further, signal was detected and traced back to a pole just in front of some trees that are in front of the Brown Derby restaurant.  Interesting placement.

When facing the fireworks location, the IR signal was blocked by my body from the neck level on down.  Any MWM device held/worn directly in front of me would get squat.  Ear Hats and Headbands would fare best.  The kind gentleman who went to question his supervisor returned and confirmed that the show is now MWM supported.  Great.

When the announcement came and the lights dimmed, I lifted my paintbrush and recorder above my shoulder and eagerly anticipated the show.  The recorder was flashing, indicating it was receiving strong signal.  Things looked good.  Only problem was that the paintbrush failed to respond to anything throughout the show.   Back at the hotel, the recording was checked and confirmed there were a lot of 55 AA .. codes sent but no 9? .... codes transmitted.  Hence, the lack of paintbrush response.  Dang.  Close, but no cigar.  A recording of this show will have to wait for another day.

Clearly, there are still some bugs to be worked out and some employees to be advised of the updates.  At the very least, the folks selling the MWM devices ought to be able to tell you where those items are likely to have the best results.  Sadly, this is rarely true.

Now that Star Wars is taking over the entire Disney Galaxy ... can a MWM light saber be far behind?

It was impossible not to notice the up tick in GUYS carting around what looked like new light sabers.  Seemed to be everywhere.  Star Wars mania.   In the aisles of The World of Disney Store, young men were fiercely waving these as they hotly stated their case for purchasing one to their parental units and, at the same time, boldly protected the universe from the bad guys.  On more than one occasion, I was correctly identified as a villian and dealt a mortal blow from their wicked, unpurchased weapon.  Such cute kids.

If Star Wars merchandise is the new hotness and light sabers are a key LED containing item, it's hard to imagine that some sort of MWM variation won't emerge.  All the other toy guns are now banned from Disney.  That leaves plastic knives/swords and light sabers as the only manly weapons left for boys to gravitate to.  And the knives/swords that are being offered aren't ordinarily associated with LED lights.

Here's hoping that the sound capabilities ushered in by the Paintbrush device will somehow come to issue the familiar humming sound of a light saber amidst the glowing blue light shinning up that long, extensible plastic barrel.  Include the familiar pattern selection button so those who so choose may flip the light to red and fight for the dark side, instead.  And, when a MWM show is encountered somewhere in the galaxy, the LEDs could take a break from their lethal purposes and merrily glow with the show.

Or maybe the folks at Disney will continue in their move to introduce MWM beverage cups and issue some MWM variant of the BB-8 cup.  That, also, seemed to be very popular in the parks.

Either way, it will be interesting to see how MWM works it's way into the whole Star Wars craze.