After roughly three years, the exterior of the venerable "Glow with the Show" Ear Hat finally got it's first makeover as part of the Disneyland 60th Anniversary celebration.  And, as can be seen in the image to the right, it's now been changed yet again!

Even though the outsides haven't appeared to change in the interim, the internal components have been steadily evolving.  The first teardown to hit the Internet came out less than a month after the original Ear Hat's release.  That provided a ton of information and laid the groundwork for virtually all the investigations that followed.  The next teardown covered "GlowEars v1.5" and  was released about a year later.  It revealed significant changes to the original design.  By the time I got around to taking a look, they were up to "GlowEars v1.6".

Here's the point.  Even though two hats may look similar on the outside, they may differ markedly on the inside.  Unfortunately, any teardown becomes somewhat obsolete within a couple of months after release.  So, with that caveat in mind, let's take a look at the changes under the hood of the most recent Ear Hats while those findings are still meaningful.

First things first.  The newest Ear Hat seems to be fundamentally the same as the 60th Anniversary hat.  Their boards both list them as being "GlowEars v2.2".   So I will refer to them interchangably until someone points out a significant difference between the two.

Now, when comparing the newest Ear Hats to the original, two things stand out immediately: the hats aren't as tall as the original and the ear attachments are quite different.  Consequently, they don't look as "domed" as the original.  They're a little closer in appearance to other non-MWM Ear Hats.  Taking out the foam cushioning layer and looking at the bare undersides, it's easy to see that large battery compartment in the top center of the original hat is now gone!  In it's place, there are now two separate compartments, one directly beneath each "ear" with each compartment holding a single AAA battery.  There's a six wire connector between the two with pins that look to be 2 mm apart. 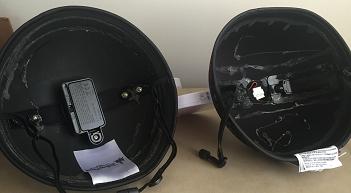 Getting rid of that large battery compartment made it possible to take out some of that excess dome and flatten the hat out somewhat.  The new conformation will probably fit a lot more people more comfortably than it's predecessor.  The liner of the original hat looked to be some sort of foam. In the new hat, the inside seems to be the same polyester material as the outside. Squeezing the outer shell of the new hat gives a spongy feel, as if there is still a foam core.

The tags attached to the hat list the components as being polyester, polyester fiber and polyurethane foam.  That's good to know if you're thinking about personalizing your hat by painting and/or anything requiring heat treatment.  Although I've not seen it offered at the US parks, I did see and offer to personalize MWM hats on the UK Disney Store website.  Their web page describes the 'personalization' process as a vinyl heat transfer.  I haven't taken an iron to a hat yet, so I can't comment on all this, myself.  I do know that the 60th Anniversary hat's patch was sewn on - not thermally bonded.  Looks like they positioned it with a piece of tape and then sewed it on.  There might be some problems with thermally bonding large patches, etc.

The electronics have been pushed up into the ears, themselves, as can be seen in the picture to the left.  Those ears also feel much studier than in the original model.  They're certainly harder to get open than they used to be!  No doubt the tighter fit helps provide better protection against water to the enclosed electronics.  I checked to see if the new ears still work with the decals from the decal hack.  Looks like they still do.

The flexible PCB extensions are gone.  All components are now mounted on rigid PCBs.  A welcome result of this relocation is that the on/off switch is now on the outside of the cap - near the base of the right ear.  No more having to remove the cap to turn it on or off!!!  The images below show the left and right circuit boards.  For more details, check out the pdf of the write up for the 60th Anniversary ears.  The new Ear Hats continue to use the TI 430G2553 processor found in all the other MWM devices except for the Paintbrush.

The report on the 60th Anniversary Ears didn't look into the wires connecting the two 'ears', so I circled back to that topic for this one.  Six connecting wires makes sense.  The battery in the left ear needs to forward both it's negative and positive connections to the right ear to form a series that will take the voltage over 3V.  Then the right ear needs to send 3V back to the left ear to run the LEDs.  The remaining three wires should correspond to the red, green and blue LED inputs.

Referring to the picture below, when the device is switched off, a 1.44V was the only significant reading measured when the multimeter's negative probe was on wire 1 and it's positive probe on wire 6r.  Those were taken to be the +/- of the left ear battery.

With the device switched on and the negative probe on wire 1, a 3.28V appeared on wire 2.  That was taken to be the positive return from the right side, leaving wires 3,4&5 as the LED controls.  Since the LEDs use a common anode configuration, the positive probe was switched to wire 2 and wires 1,3,4,5&6 tested after sending the codes for solid red, green and blue.  The results are shown below. 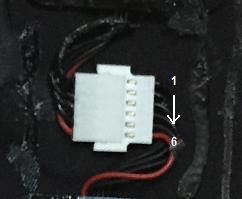 The battery compartments couldn't be extracted from the hat.  So when the two PCBs were removed,  alternate power was needed.  In a thread on the doityourselfchristmas.com forum, @RobG identified the U2 component as a TPS61221 step-up boost voltage converter.  So it should be possible to power this device with voltages as low as 0.7V.   I haven't tested down to that level but have tried a single 1.4V AAA battery attached to the negative battery connector of the left PCB and the positive battery connector of the right PCB and it ran fine.

For some purposes, it would be more convenient to inject the power at the connector instead of having to run wires all the way out to both ends of the PCBs.  In what turned out to be a fortuitious accident, I meant to test adding 3V across wires 1 & 2 but actually hooked the anode to wire 5 and the cathode to wire 6 - and it seemed to run just fine!  No other combination worked and less than 3V wouldn't do it either.  Makes no sense to me, but works.  Hopefully, someone with a better handle on all this will fill us in as to why this combination works.  But for now, I'm just happy to have a convenient solution that works.

The new hats have switched to the longer stored sequences that the other devices emit. Gone are the shorter 96 42 00 00 48 ?? 0C ?? CHK sequences of the previous model.  The stored codes observed

The new Ear Hat design isn't as amenable to 'migrations' as it's predecessor.  They glue the heck out of everything.  I wasn't able to come up with an extraction strategy that didn't damage the ears, the hat and the battery compartments.  In fact, All I eventually came away with were the two rigid PCBs and their connecting wires.  If no one comes up with an effective way to extract the various parts of the hat from their gluey mess, there may be a lot fewer hat migrations in the future - or at least fewer Ear Hat migrations.  Time will tell.